In 2005 I sold a nice Leica M6 TTL with a mint Summicron ASPH 35mm to some random stranger on eBay. Last week I corrected that mistake by buying another M6. 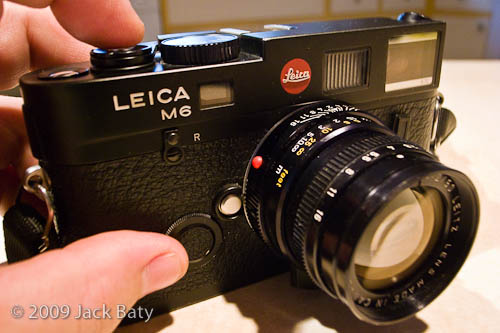 Why would I do that? Hasn’t everyone “gone digital” by now? Sure, I’ve gone digital – twice, at least. Lemme ‘splain.

I went digital, the first time, in 2003. A few months later I became fascinated with rangefinders and bought a Canon Canonet. That chain of events let me to my first Leica in 2004. A year and a half after that I’d gotten frustrated with processing and scanning film, so I sold the film gear and went back to digital. That 20D was just too tempting it seems.

Whew! So where are we now? It turns out I never really got over the Leica. I was hoping for an M8, but at close to $6,000 for just the body, that’s not likely to happen soon. Besides, the M8 is not full-frame, and has certain other issues, not the least of which is impending obsolescence. Maybe the M9, but for now…

Recently I was going through a bunch of old shots and I noticed that many of my favorites were taken with the Leica or the Canonet. Maybe not most but enough to notice. That was all it took. I gave in to another round of Leica Lust and ordered a nice used M6 TTL with a (5th version) Summicron 50mm lens. Guess I’ll just have to deal with the pain of scanning negatives. For that, I ordered a Nikon Coolscan 5000, so at least it will be faster and about as good as it gets, short of a drum scanner, scan-wise.

I’ve put 3 rolls through the M6 this weekend, and processed one (Tri-X in Diafine). Some things just feel right and this camera is one of them. It’s interesting, a week ago I was testing a $300 Photoshop plugin to make digital images look like Tri-X pushed to 1200. Guess I don’t need that anymore.