Keep the Nikons or the Canons?

I find myself with a collection of some of the finest film SLRs ever made (and one really nice Digital). 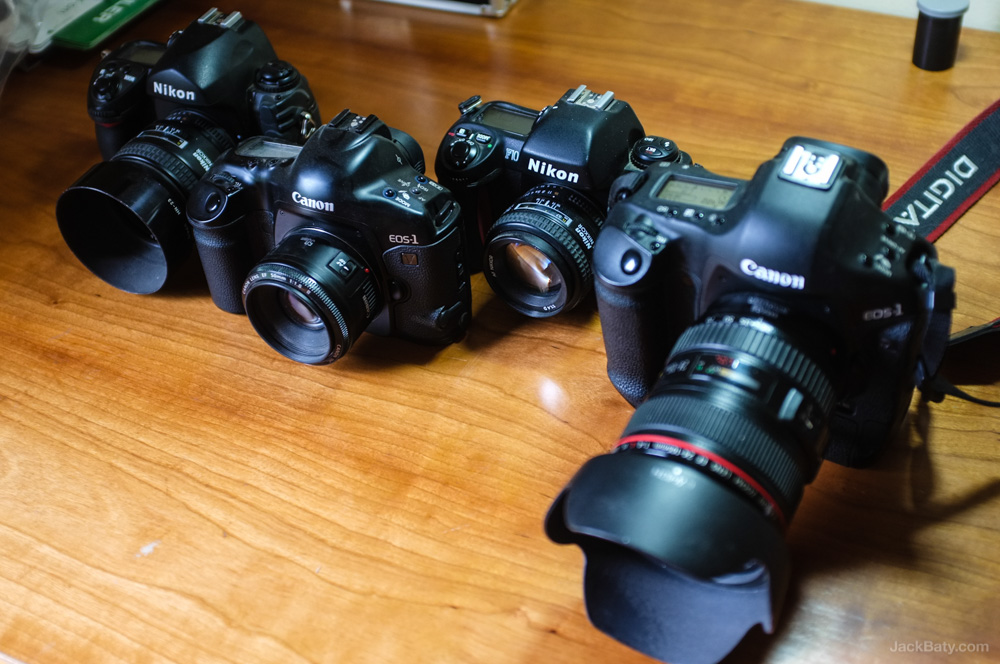 The problem I’m having is that I really shouldn’t keep both systems. Why not? It’s a matter of desire. By having really good Canon gear available I’m always on the lookout for a nice new (or old) lens or maybe another flash. Same goes for the Nikons. The F6 is great but I don’t have a good Nikon flash. Should I get an SB-800 maybe? And that Canon 70-200 2.8L that I used to have was fantastic. I should keep my eye out for another, right?

And so on. I have been unable to commit to a single system and it’s driving me nuts.

Part of me wants to give up 35mm film photography altogether and stick with Digital for the smaller format. Many of my favorite photos the past couple of years have been taken with medium format cameras. And now with the fun I’m having with 4×5, not shooting 35mm film wouldn’t be a huge sacrifice, would it?

Yes, it would. Besides, I still have a number of 35mm rangefinders and compacts that I still love using. Killing 35mm film just isn’t going to happen

So, Canon or Nikon for the SLRs? To help me decide I’ve started to list a few pros and cons of each below. I hope this helps me to decide on a winner.

My digital SLR is a Canon 1D Mark III. It’s pretty great when paired with the 24-105L. Without this camera I would be left with the little Fuji X100 as my only digital camera. Not quite willing to go there yet.

The EOS 1v is awesome. The canon bodies seem to fit my brain and hands better than the Nikons and the 1v is about the best there is.

Flash works better. I’ve spent a lot of time with Nikon’s much-loved CLS flash system and we just never got along that well. I used to have a Nikon D700 and SB-900 and for the life of me could not figure out how to get the best of them. I put a 580 EX II on the Canons and somehow the flash just works. I don’t frequently use flash, so simple and working is what I prefer. Canon surprisingly wins here.

My AE-1 Program only uses the older FD lenses, so it’s almost like having 2 different systems. That is unfortunate. Also, there are very few older Canon bodies that I’m interested in trying.

The Nikon F6 is arguably the finest film SLR ever made, or that ever will be made. It truly is a fantastic camera. The meter is nearly flawless, it focuses fast as anything I’ve used. Oddly, although it feels wonderful in hand, it just doesn’t “fit” me the way the 1v does. I can’t explain it, but I get more of a charge out of picking up the 1v than the F6. One little thing that bugs me is that with my eye to the viewfinder, my nose pushes the focus point control and moves the focus point inadvertently. I have to lock the control, making it pretty useless.

I also have a Nikon F100 which is nearly as good as the F6 and cost about 1/6th as much. They feel and behave the same, so it’s easy switching between them, and I’m not as afraid of something bad happening to the F100.

Lenses for the Nikon are everywhere. Old, manual focus AIS lenses work as good as the latest auto-focus lenses.

Some day I want to try an FM3a or an FM2n or an F5 and would benefit from already having lenses I can use with those older bodies.

I have friends with Nikon digital systems, so that makes a few other lenses and accessories available to me. No small advantage, that.

Can you see the problem? They’re both awesome systems and I have just enough invested in each that it could go either way.